Welcome to The Revolution

Welcome to The Revolution!

Olympia Hotel Management (OHM) has announced that it has been chosen to operate The Revolution Hotel in Boston. Located in the city’s vibrant South End, the hotel is minutes away from Copley Square, Newbury Street Shopping and the elegant Public Garden in Back Bay. The Revolution Hotel opened in 2018 and since then has redefined the concept of a stylish and remarkably affordable boutique property in the city. It’s an eclectic, art-filled space aimed at urbanites who come to stay, but also to meet, work, dine and socialize.

“As a New England-based hospitality company, we’re thrilled to add a Boston hotel to our growing portfolio,” said Sara Masterson, President, Hotel Management, for Olympia Hotel Management. “The Revolution is the perfect fit with our expertise in creating a hotel atmosphere that’s both welcoming to guests and can serve as an energetic gathering place for the community.”

“We are delighted to have Olympia as our new operator, said Bruce A. Percelay, Chairman and Founder of The Mount Vernon Company. “Matching the coolest hotel in Boston with a seasoned boutique hotel firm is a perfect match.”

SOPHY® Hyde Park has been named one of the 10 Best Hotels in Chicago by the readers of Travel + Leisure in the 2022 World’s Best Awards.

The readers also ranked the city of Chicago among “The Best 15 Cities in the United States.” 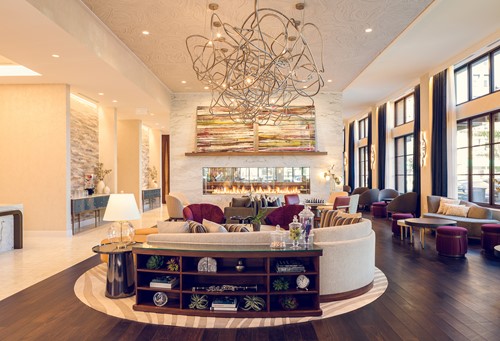 SOPHY® Hyde Park has been named one of the 10 Best Hotels in Chicago by the readers of Travel + Leisure in the 2022 World’s Best Awards. The readers also ranked the city of Chicago among “The Best 15 Cities in the United States.”

The stylish 98-room boutique hotel is located in the cultural heart of Chicago’s Hyde Park neighborhood. The property is near the University of Chicago, the new David Rubenstein Forum, the Museum of Science & Industry, Frank Lloyd Wright’s Robie House and the site of the future Obama Presidential Center.

Since opening in 2018, it has become the social hub for the diverse urban community that is the very definition of Hyde Park. The lobby living room with its striking fireplace is a gathering space to mix and mingle, as is the hotel’s Mesler Chicago restaurant, bar and alfresco space called The Sanctuary. Under Executive Chef Alejandro Arreola, the former Chef de Cuisine at Four Seasons Hotel Chicago and The Ritz-Carlton, Chicago, it’s become a chef-driven destination with an inventive menu of comfort food reimagined for 21st century palates.

“For an independent boutique hotel on Chicago’s South Side, this is an extraordinary moment,” said Anthony Beach, General Manager of SOPHY Hyde Park. “We are immeasurably grateful for the recognition from the readers of Travel + Leisure. I couldn’t be prouder of our SOPHY Hyde Park team for going above and beyond every day. This is a win for all of us and for the historic Hyde Park neighborhood.”

Developed by The Olympia Companies and SMART Hotels, SOPHY Hyde Park is managed by Olympia Hotel Management and aligns with Olympia’s expertise in developing and managing independent, award-winning boutique properties that evoke a strong sense of place and become an integral part of the community.

“Congratulations to SOPHY Hyde Park for achieving this impressive top ranking,” said Sara Masterson, President of Olympia Hotel Management. “Since the day it opened, the hotel has been a shining star among our independently-owned hotels and deservedly a standout overall in a field comprised of the industry’s best-in-class properties. The 2022 World’s Best Award confirms the success for which they were destined all along.”

Designed as a four-diamond property and awarded LEED Silver certification, Chicago-based GREC Architects are the architects of SOPHY Hyde Park while the design firm of Stonehill Taylor is responsible for all of the hotel’s interiors.